Congratulations to our President, Tony Talmage, for receiving a national award for his work as joint editor of the magazine Dowsing Today.

The British Society of Dowsers has presented Tony with the Bell Award, a specially-commissioned Scottish Quaich, which is an annual accolade given for services to Dowsing Literature. It is the second time Tony has received the award, the first being in 2012 for his article linking the art of divining to the Quantum Theory.

The 2017 citation says, ‘For raising the standard of both the content and appearance of Dowsing Today.’

Since his 2012 award he has extended his literary ambitions by writing four books, all available on Amazon, comprising two novels, one non-fiction called ‘Dowse Your Way To Psychic Power’ and another on a metaphysical theme entitled ‘In Tune With The Infinite Mind.’

Tony said, ‘My work as joint editor was definitely a win-win situation for me as I learned so much more about dowsing through editing articles by members. These ranged across the spectrum – from energy healing and casting out negative spirits from possessed people to the power of sacred sites and detecting crime using a pendulum.’

Tony, who writes under the name of Anthony Talmage,  has now handed over the reins at Dowsing Today and is working on his third novel, a political thriller ‘The Kingdom And The Glory’ about a disastrous Brexit and how a maverick US President rides to the rescue by making the British Prime Minister an offer he can’t refuse, but which the Royal Family vows to fight to the death!

All of  Tony’s books are available on Amazon as both download and paperback versions. 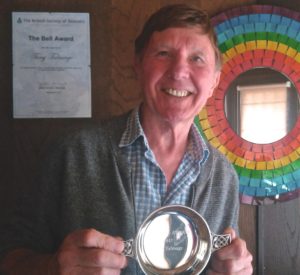